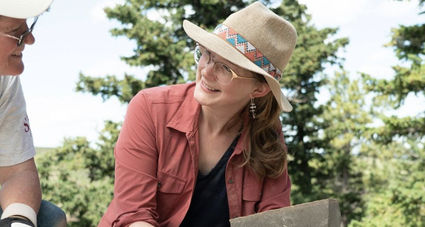 A new three-part television series exploring prehistoric life across the Western U.S. is airing on PBS this summer.

“Prehistoric Road Trip” takes viewers on an epic adventure through dinosaur country to search for mysterious creatures and bizarre ecosystems that have shaped Earth as we know it. With Emily Graslie as host and guide, the series travels thousands of miles to visit some of the most active and dynamic fossil sites in the world. Revealing the amazing wonders preserved beneath our feet, the three-part series combines science, culture, and history for an unforgettable expedition through hundreds of millions of years. “Prehistoric Road Trip” premiered June 17 and will air on Wednesdays through July 1 at 8 p.m. on PBS (check local listings).

In the series, Graslie hits the road, heading to the heart of America’s fossil country – the Northern Great Plains – for a fun and fascinating journey to explore 2.5 billion years of our planet’s history. Crossing the Dakotas, Montana, Nebraska, and Wyoming, she examines the fossils of diverse prehistoric creatures and plants and introduces some of the people who helped bring these ancient discoveries to light. Each episode turns back the pages of the past to examine different eras along Earth’s geologic timeline, focusing on the geology, ecology, and environment. On this immersive adventure, Graslie uncovers and discovers the history of North American dinosaurs and other fascinating prehistoric creatures, including ancient fishes, mammoths, and early mammals. Filmed using state-of-the-art drone technology and featuring dynamic illustration graphics, the series brings this now-extinct world to life.

“I am thrilled that I get to share my love of nature, history, paleontology, and – in general – really old, really dead stuff with the PBS audience,” said Graslie. “And this is an incredible opportunity for me to revisit my home state of South Dakota, where I grew up exploring the great outdoors as a kid.”

The second episode of the mini-series, “We Dig Dinosaurs,” will first air on Wednesday, June 24. In this episode, Carter County Museum and the Annual Dino Shindig in Ekalaka are featured. Graslie cruises into the Cretaceous, where astonishing creatures like T. rex dominated the planet. But what happened to these tremendous animals? And how did other life forms survive an apocalyptic asteroid that crashed into Earth 66 million years ago?