The Carter County Geological Society has received a grant of $6,740 from the Montana History Foundation to establish the Carter County Heritage Orchard at the Carter County Museum with the help of local ranchers, scientists, and volunteers. Funds will go towards grafting rootstock, fencing, compost, signage, and other components for the creation of the heritage orchard, the first one of its kind in eastern Montana.

In 1930, two of the largest and best known apple orchards in southeastern Montana were those of Jack Kinsey and R. C. Miller in Ekalaka. Having purchased his ranch from John T. Smith, Miller discovered the apples Smith had planted in early 1905 continued to bear fruit. Three varieties of apples were produced: Wealthy, Hibernal and Greening. After arranging an exhibit of these apples in the fair held in Ekalaka, Miller took first prize, then headed on to the Eastern Montana Fair in Miles City, where he also earned first place. Mr. Miller w 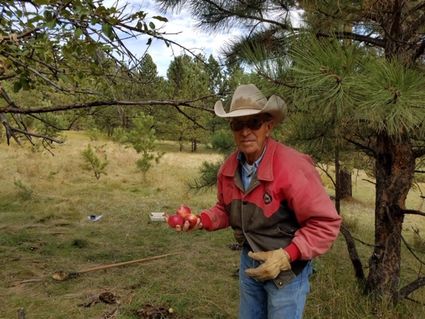 Lloyd Carroll enjoying an apple from a historic tree. Photo by Betty Carroll.

as convinced fruit culture could be made a success in regions of southeastern Montana, and particularly in Carter County.

Today, apple trees from orchards throughout the county are few and far between, representing a dwindling resource and a visible threat of the disappearance of these trees and the connection to those who planted them. Ranchers who have fond memories of eating apples from these orchards are interested in preserving this heritage and have offered to donate buds to the Carter County Museum, so that the trees may propagate through the practice of grafting and be cared for in a central community orchard accessible to and enjoyed by the public for future generations.

Over 70 heritage orchards are registered in Montana, with none listed east of Billings. The Carter County Orchard will be the first of its kind in this part of the state and represents an opportunity to broaden Montana’s fruit growing history by propagating heirloom varieties from homesteader apple trees. Peter Kolb, MSU Forestry Specialist, will offer his expertise on tree growth and Katrina Mendrey, Orchard Program Manager at the Western Agricultural Research center will help advise on the orchard’s establishment.

The project will begin in May 2021 with preparation of the land for planting, construction of a fence, and installation of rootstock by museum volunteers from the Ekalaka community. The orchard, which will be located on the lawn next to the Central Schoolhouse, will become a feature of the community through annual programming and educational activities.

The museum would like to thank Phil Cook, Lloyd and Betty Carroll, Sharon and Llane Carroll, Scott Elmore, Peter Kolb, and Katrina Mendrey for their continued assistance in this project. Carter County residents who have heritage apple trees (older than 75 years) on their lands are invited to contact the museum at outreach@cartercountymuseum.org if they would like to have their trees be part of the project.