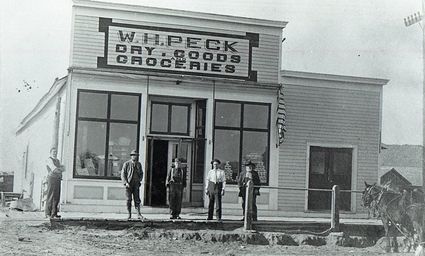 Note: This article is the final in a series about the founders of the Carter County Geological Society and museum. Each story features a founder, their story and items they have donated.

Without the vision, intellect and orderly mind of Walter H. Peck, The Geological Society might have just become caretakers of collections of unidentified fossils and artifacts. His curiosity and love of natural history compelled him to not only collect, but to understand the history behind the fossils and artifacts.

When Peck came to Montana, in 1888, his dream was not to be a founder of a great museum, but to become healthy. He was born in Cornwall, Connecticut on March 5, 1870. He attended high school in Ansonia, Connecticut where received training as a gunsmith. When he developed asthma, his doctor recommended a higher and drier climate. Reno Swift, a family friend, owned a ranch west of Ekalaka and Peck was invited to work as a ranch hand for Swift. He worked for Swift and other ranchers as a general ranch hand and as a sheepherder for many years. It was during these years that Peck became acquainted with Septon “Zip” Cady and DeLoss Hall and found they shared an interest in natural history.

His health gradually improved but the long hours and low pay of a sheepherder was not the future he had envisioned for himself. He left sheepherding to form a partnership with Loren Gilman in a successful ranching venture, which ended in 1901. Over the years he worked at various jobs including Deputy Assessor, Deputy Treasurer, Deputy Sheriff and Justice of the Peace for Carter County. In 1904, he opened a general store called W. H. Peck Company. Later, he operated the Tri Valley Creamery.

In 1904, he married Elizabeth Foster, a cousin of Septon Cady. Sadly, she died only one month after their marriage. In 1910, he married the love of his life, Margaret Campbell Cunningham of Ansonia. A son was born to Margaret and Walter Peck but passed away at the age of three months.

In Volume II of “Shifting Scenes,” Ruby Rowley points out that Peck, in his travels around Carter County, became concerned about the destruction and waste of the irreplaceable fossils and artifacts in the area. DeLoss Hall and Zip Cady shared his feelings and they began collecting and preserving as many fossils and artifacts as they could find and find storage for. They were encouraged by the work of Dr. Elmer Wood’s field trip in the Chalk Buttes in 1904.

But, as usual, life got in the way. World War I was in progress and Peck became the oldest volunteer from Carter County when he enlisted in the army. He later resigned but was recalled in 1918 and commissioned as a 2nd Lt. in the United States Guard. Peck was a lifelong member of the IOOF and served as an office holder for many years. It was through Peck’s perseverance and legislation that Carter County was able to establish the Beaver Lodge IOOF Cemetery.

After the formation of the Geological Society, it became obvious that space was needed, not only to prepare and store the collections but also to display them. Peck received permission from the commissioners to use a room in the basement of the high school for this purpose. In the summer of 1934, with Peck’s skill for organization and the help of many volunteers, the room was cleaned and shelves, tables and file cabinets put in place. The Carter County Museum had found a home.

Throughout the years Peck participated in many field trips despite his asthmatic condition. Many fossils were collected and preserved on the excursions, but the discovery and excavation of the large hadrosaur in 1938 was by far the most important find. With the help of Ted Snyder, Idella Kennedy, Mrs. Peck and other volunteers, the 28-foot dinosaur was recovered. In one of Peck’s letters to his sister, Carrie Peck, he described the expedition as a “Limited Safari” as it was limited in funding, personnel and equipment. He later organized his notes with pictures by Ted Snyder and titled it Safari (Limited) 1938. Peck did not get to see the Anatotitan displayed as it was not mounted until after his death.

Peck was a perpetual student and avid scrapbooker. During the next decades he filled numerous handmade scrapbooks with articles on every category that piqued his interest. He saved any news items pertaining to the museum, the Geological Society and his own political life. He saved all his issues of The Natural History magazines and handbound them into books, which are in the museum archives. He learned about the Geological Ages and the rocks and layers of times in Southeast Montana so that he could classify the fossils they were finding. He learned to keep excellent field notes for all expeditions. Peck and Idella Kennedy sent many letters to museums and paleontologists all over the United States, asking for information and help with identifying, preserving and labeling their finds.

As the museum’s first director, Peck kept copies of all correspondence. One scrapbook contains a series of 24 letters from Dr. Walter Granger of the New York Natural History Museum and Peck’s replies. Peck had asked for help in identifying the “mystery” skull found in the Chalk Buttes area. Dr. Granger identified it as a Pachycephalosaurus and was responsible for the wonderful casts now on display. The letters are dated from Feb. 26, 1939 to Aug. 29, 1941, just one week before Dr. Granger’s untimely death while on a field trip in Wyoming. 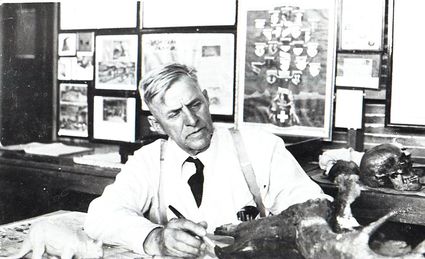 In 1943, Walter Peck was elected to serve a term in the Montana Legislature as Senator from Carter County. As Senator, he helped write and pass a bill that allowed each county to tax property owners a small levy to support a county museum. The Carter County Museum was the first county museum to be established in Montana and is now known as one of the foremost dinosaur museums in the U.S.

Peck completed his term as senator and resumed his work as director of the museum. On July 26, 1946, while climbing the steps in the courthouse, Peck suffered an asthmatic attack and passed away.

Walter H. Peck, as one of the founders of the Geological Society, has earned the honor and respect which has been given to him. He not only collected artifacts, but also instituted the basic concept of preserving, cataloging and labeling, which has allowed succeeding directors to concentrate on their personal methods of educating and displaying history.