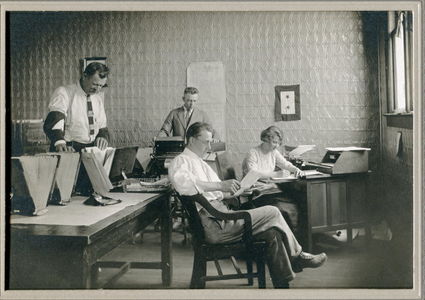 Note: This article is the first in a series about the founders of the Carter County Geological Society and museum. The museum will host a meeting at 7 p.m. on the first Thursday of each month through April, featuring a founder, their story, and items they have donated.

The organized search for fossils in Carter County began in 1904 when Professor Elmer S. Riggs and his crew from the Chicago Field Museum found the skull of a triceratops five miles west of Chalk Buttes. Many residents of Carter County became interested in identifying the fossils they had found on their ranches but also wanted to learn the proper way to collect and preserve their finds. One such resident was Septon “Zip” Cady.

Septon McCook Cady was born December 4, 1862, on a farm near Northfield, Minnesota to Helen Foster Cady and Anthony Wayne Cady. His father died shortly after his return from the Civil War and his mother passed away soon after, leaving Cady an orphan at a very young age. He was left in the care of his uncle, Samuel Foster.

Cady was a strong, well-built young man, and at the age of 16 he was inspired by the stories of gold in the Black Hills. According to his obituary in the Sept. 18, 1936 issue of the Ekalaka Eagle, “He sold his cow for $35.00, packed his grip [bag] and joined his friend on a covered wagon and headed for the gold fields.” The covered wagon train took him as far as Ft. Pierre, South Dakota, where he crossed the river on a ferry boat and caught a ride with a bull train to the Black Hills.

Cady worked at various occupations over the next few years. This included mining at the Homestake mines in the Black Hills, hunting buffalo in Wyoming, and as a ranch hand in Wyoming and Montana. He worked at Fort Meade-Keogh Stage Station at Powderville for awhile as a store clerk and made sure the horses were ready for the next stagecoach. He increased his knowledge about landforms, finances and human nature with every new job, which would serve him well later in life.

In 1884, Cady returned to Minnesota and in 1886, he and his uncle Samuel Foster loaded most of the family belongings onto an emigrant railroad car bound for Dickinson, North Dakota. They hauled their goods by freight wagons to the Chalk Buttes and founded the “Keystone S” Ranch. The Keystone was mainly a horse ranch, but also raised a few cattle. They bred a cross of Morgan sires and smaller pony-type mares that were extremely tough, but also tough to break. At this time, much of Montana was considered open or free range, so the Keystone ranch covered thousands of acres. During the slack times, Cady and his nephew, who had joined him, would work for the WL ranch and other cattle companies that needed riders. Cady was known as an excellent roundup cook and an all-around ranch hand.

During these years, Cady became friends with Walter Peck, who shared his life-long interest in paleontology. In one of Peck’s scrapbooks, he told of an expedition where after collecting and preparing fourteen bones, a cave in at the site covered all their hard work. Peck wrote that Cady preached a “real cowboy” sermon over the bones, while Peck sat and smoked his pipe.

Cady bought shares in the formation of the Ekalaka Commercial State Bank in 1908 and was named president. In 1934, the bank consolidated with the Ekalaka Bank, was renamed Ekalaka State Bank, and Cady remained president. He supported many community organizations and was a member of the Masonic Lodge, school board, and privately assisted several students with their financial needs. With the influx of homesteaders and the decrease of the open range, Cady and Foster sold the Keystone Ranch at Chalk Buttes and purchased the Russel Creek Ranch west of Ekalaka, now the Lou Strangford ranch.

On May 8, 1909, when Cady was 47 years old, he began a five month vacation, which he called “The Adventure.” He rode the train to Minneapolis, where he had a boat built to his specifications and spent the months exploring the Mississippi River to New Orleans. Someone gave him a small journal in which he faithfully recorded the highlights of the trip. This little journal is in the Carter County Museum archives.

Cady developed an interest in photography in the early 1900s and one of the greatest treasures given to the museum is his collection of glass plate negatives. Marshall Lambert printed contact prints of the negatives, which are numbered and identified as much as possible. Many of the plates were digitized as part of a museum intern project in 2017.