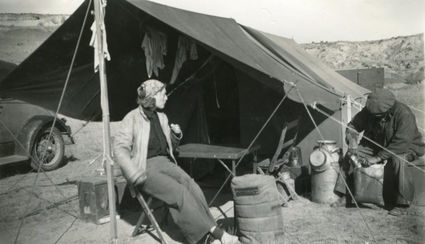 Carter County Museum. Idella Kennedy outside a tent during the 1938 Limited Safari

The Founders Day celebration of the CCGS slipped quietly into being shortly after the death of Walter Peck. At the January meeting Mrs. Jessica Hunt read a tribute to Peck, Cady and Hall, the three men credited with the founding of the CCGS. The tribute was so well received that the anniversary banquet became a venue for honoring the vision of its founders.

But a careful reading of the early records will reveal that not all the founders were men. Idella Kennedy, Margaret Peck and Laura Hall are among the numerous women who devoted many hours to preserving the past and planning the future.

Idella Alta Kennedy was born July 3, 1911 in Carter County to Finn and Tessie Kennedy and raised on the family ranch southeast of Ekalaka. She attended rural schools until her and her sister started high school, when the family moved to Ekalaka. Kennedy graduated from CCHS in 1928 as Valedictorian and then attended MSU in 1932, majoring in English and Journalism. She returned to Ekalaka and taught English in CCHS from 1932- 1936.

Kennedy participated in as many field trips as possible and in 1933, while on a field trip in the Chalk Buttes, she found a partial jawbone of a small rodent. Dr. George Gaylord Simpson of the American Museum of Natural History of New York identified it as a multituberculate meniscoessus and published a paper describing it as “by far the best Multituberculate specimen yet discovered in the American Cretaceous period.” The original jawbone was given to the AMNH and in 1939 Kennedy donated the cast to the Carter County Museum.

Kennedy continued her education with summer courses in geology and paleontology, as well as journalism related subjects. She was instrumental in organizing the Geology Club and served in the CCGS as librarian. She wrote many letters to well-known museums all over the U.S. requesting information on the collecting, preserving and displaying of fossils and artifacts. She became proficient in classifying and cataloging specimens and was an instructor for the girls in the National Youth Administration program. Kennedy also instituted the Smithsonian system of identifying and cataloging items, which is the universal method used by museums today.

When Walter Peck and others acquired an unused room in the basement of the high school, Kennedy helped set up and organize the space into a usable lab and collection area for the specimens they were finding.

Kennedy accepted a teaching position in Sidney, MT in 1936 but never lost touch with the CCGS. In 1937 she attended a paleontology convention in Billings with members of the CCGS and wrote a summary of the meeting for the club. Her attention to detail and her enthusiasm and hopes for the museum are evident throughout the report. She was ahead of her time with her concern for the need of conservation and stewardship.

The summer of 1938 was an important time for the members, as Mr. and Mrs. Peck, Kennedy and Ted Snyder began a field trip that resulted in the discovery of a large, rare duckbill dinosaur. Ted Snyder was a young amateur paleontologist from Arizona. Mr. Peck and Ted Snyder became acquainted in 1934 through a letter mix-up from Barnum Brown, which resulted in Snyder spending the summer in Carter County working with the Geology Club. In 1938, he returned to Carter County just in time to assist in the field trip that Peck later called “The Limited Safari.” Kennedy spent most of that extremely hot summer helping collect and preserve the bones of the Anatotititian copei dinosaur, the pride and joy of CCM.

Kennedy attended summer schools in Billings, Chicago and Detroit, specializing in science and natural history. Her goal was to meld basic education with the sciences and making learning exciting. When she returned to teach at CCHS in 1947 – 1949, she worked with Marshall Lambert to prepare display boxes that could be taken around to local schools so that all students could have a hands-on experience. These boxes contained examples of minerals, fossils, plants (fossils) and other artifacts. 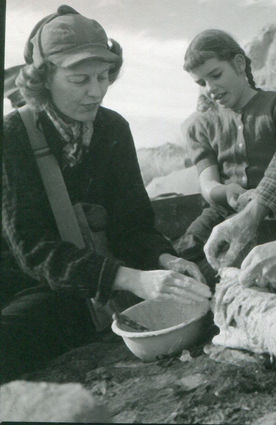 Miss Kennedy taught Journalism and English at Kalispell, MT from 1940 – 1947 and was president of the Montana Interscholastic Editorial Association from 1943 to 1944. She finished her teaching career in Arcata, California, teaching at the McClasky School for 20 years.

The museum is indebted to Miss Kennedy for the enthusiasm, encouragement and vision she had for an institution that would not only collect and display artifacts, but become a vital instrument for teaching as well.

Note: This article is the third in a series about the founders of the Carter County Geological Society and museum. The museum will host a meeting at 7 p.m. on the first Thursday of each month through April, featuring a founder, their story and items they have donated.