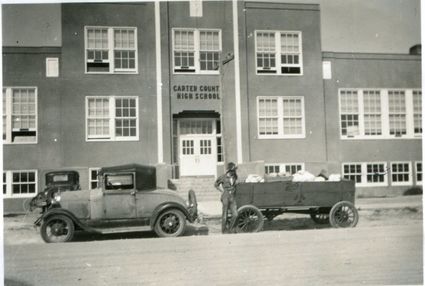 Carter County Museum. DeLoss Hall in front of CCHS with a truck and trailer during the 1938 Limited Safari

In the fall of 1954, photographer Ross Madden traveled to Ekalaka to illustrate the Life Magazine story “The Town That Hunts Bones.” All his black and white pictures were striking, but the photo of 73 year old DeLoss Hall walking down a mud butte with a huge dinosaur bone over his shoulder told the whole story. Along with Walter Peck and Septon Cady, Hall helped preserve the area’s rich geological history.

Hall was born in Hennepen Co. MN, December 30, 1880 to Mr. and Mrs. Hollis Hall. He came to the Ekalaka area in 1890 with his parents and siblings and settled in the HS Basin. He attended the Glen Rock rural school and later the Minnesota State Normal School. After his marriage to Laura Booth in 1908, he studied at Chadron Academy, specializing in steam engines. He met Cady and Peck in 1898 and they discovered they were all interested in natural history. That interest formed a bond of friendship which lasted all their lives.

Hall operated several sawmills in the area, partnering at various times with his brothers and Frank Snow. He was able later to buy out his partners and was successful in the lumber business. His brother-in-law, David Richards, built the beautiful Hall house on the corner of Main and Park for DeLoss and Laura.

Hall took his civic duties very seriously, as he was an active member of the I.O.O.F. organization and the Masonic Lodge. He also served as the area’s Representative in the 1935 session of the Montana State Legislature. According to the November, 1935 issue of the Ekalaka Eagle, he was instrumental in the organization of the first study of paleontology club. At the first meeting, Septon Cady was installed as President, DeLoss Hall as Vice President and W.H. Peck as secretary. After the CCGS was incorporated, he continued to hold an office whenever needed.

Hall not only accompanied Peck and others on digs, but also worked on the preparation of the fossils that were collected. Another one of Madden’s photos shows Hall working with students in the museum at the CCHS. He was with Dr. G. Simpson of the New York Natural History Museum when the saber tooth cat skull was found. It was the first saber tooth cat to be found in the Lower Oligocine Epoch. Since the skull was of a rare breed of cat, the New York Museum felt that it would benefit the scientific community more if it were in their museum. So far the Carter County Museum staff has not seen the cast that was promised.

Hall and Peck were called to Alzada to examine a mammoth tusk found by the road crew in a gravel pit. After many hours of research and hard work, the ten-foot specimen was prepared and is still on display at Carter County Museum. Hall also located and helped excavate a huge triceratops skull. It was almost 7 feet long with a frill of 54″ and weighed over a ton in the cast. 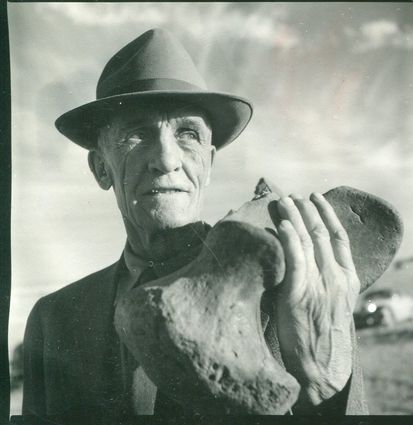 Image by Ross Madden. DeLoss Hall stands with a fossilized femur in 1954.

It was during these years that Mr. and Mrs. Hall accepted the responsibility of caring for Mary Anderson, the daughter of Laura’s sister. Mary lived with them through her school years and graduated from CCHS as Salutatorian of the class of 1942.

When Peck was putting together the equipment for the “limited Safari,” he relates that Hall donated all the lumber for the trailer for their supplies. He also mentioned that often on Sundays, the Halls would drive out to the dig site with refreshments, help and moral support. He maintained his interest in the Geological Society and the minutes of the January 6, 1955 meeting of the CCGS note that Hall gave a brief report on prospecting for uranium in this part of the United States.

Note: This article is the second in a series about the founders of the Carter County Geological Societyand museum. The museum will host a meeting at 7 p.m. on the first Thursday of each month through April, featuring a founder, their story and items they have donated.