Skip to content
From the Grave to the Cradle to the Clamshell
by Ryan OConnell
June 15, 2018 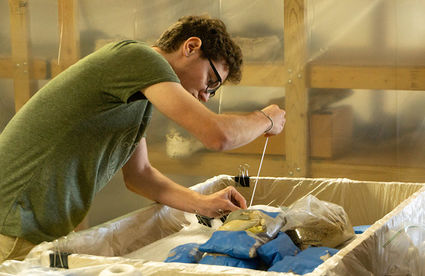 Stew Cook sews a clamshell cover at the museum warehouse on Tuesday.

The Carter County Museum has so many fossils, they would spill out of the museum’s back room like a cartoon character’s stuffed closet if they were all stored on site. Approximately 80 percent of the museum’s collection is held at its warehouse.

When Nathan Carroll took over as curator of the museum, he found the warehouse full of bones laying on the ground. Since then, he has organized and built shelves to keep them off the floor. The Denver Museum recently donated archival shelving units to help house smaller specimens.

Fossils in the museum’s warehouse are getting new protective casings. These clamshells are superior to regular plaster and fiberglass cradles. They have feet to prevent rocking while shelved, keep the specimen from accumulating dust and provide a safe, permanent home. The clamshells are easy to transport which makes taking fossils to other museums, schools or outreach events easier.

“Fossils are rare,” said Henry Ballard, “good fossils are even rarer.” Ballard volunteers at the Smithsonian in Washington D.C. where he has learned to make designer clamshells. He was in Ekalaka training museum staff how to make the custom cases.

The team chose a triceratops nasal horn to build their first clamshell around. A plastic sheet was laid over a bed of sand, and the bone was submerged up to its midpoint. The midpoint is essential, it creates a balanced, even clamshell.

A foam cover was cut to the horn’s specific dimensions. To insure the cover was snug around the fossil, Paleo Lab Manager Stew Cook cut and flattened ill fitting protrusions before sewing them back together.

Once the optimal position of fossil, cover and sand was achieved, sandbags were put in place to make sure nothing shifted.

The crew donned latex gloves, plaster was mixed and everyone took a turn dipping fiberglass, which looked like a dryer sheet, into the Elmer’s colored plaster. The fiberglass stretched as the team applied three layers and smoothed out the edges. Sandbags were reapplied and the plaster was let alone to dry.

After an hour and a half, more layers will be applied and once those dry, the top piece of their clamshell will be done.

Ballard said a large, complicated skull could take three days to make a clamshell for, and that’s if you do nothing else. After a fossil is clamshelled, a data tag is attached to the outside.

Cook estimated that 30 percent of the fossils in the warehouse have no accompanying data. He said knowing where in time the fossil existed and the region it was collected is very important to paleontology.

Since the early days of fossil hunting, the late 1800s to 1920s when finding the biggest fossil won, researchers have expanded their recording methods. “It was kind of like fossil stripminning,” Cook said. 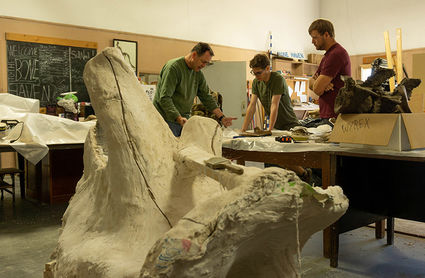 Now, paleontologists not only record a fossil’s GPS coordinates and the type of sediment it was found in, but also who participated in the dig, if any special chemicals were used on the fossil, if a cast of the fossil exists… there is never too much data. In the constant quest for data, Kolbe White is spending the summer working on GPS mapping for the museum.

Ballard will be back doing more clamshells with museum employees during the 6th Annual Carter County Museum Shindig starting July 28.

Dinosaur authorities at this year’s Shingdig will include John Scanella talking about abnormal Triceratops, Holly Woodward Ballard explaining the scientific process and Victoria Arbour speaking on the living fortress of Hell Creek, the Ankylosaurus.