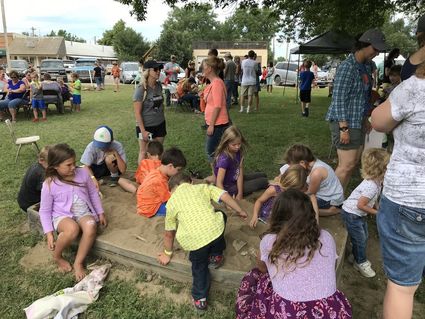 Carter County Museum’s Annual Dino Shindig was again a Argentinosaurus-sized success this year. In its seventh year, the event has become one of the more anticipated summer events in Ekalaka, and each year, an expanded slate of activities has helped it to grow.

At least four hundred and sixty-four attended talks and family activities on Saturday, similar to last year’s totals. However, museum director Sabre Moore told the Eagle that the talks held at St. Elizabeth Lutheran Church were “standing room only” and that it was the best talk attendance of any Shindig to date. Of those 464 people, 108 were from Carter County, 150 were from the rest of Montana, 162 were from other states and 44 were international travelers. People attended from North Dakota, Colorado, Rhode Island and even Korea; the furthest traveled from Japan.

Fifty people enjoyed the program at Medicine Rocks on Sunday while 60 enthusiasts participated in the fossil dig. An additional fifteen volunteers were at the dig site providing transportation. Total attendance at the museum from July 21 through July 28 was 770.

Auction items on Saturday raised over $3,000 for the museum and Moore said that the museum’s gift shop did quite well too. The highest selling auction item was a weekend getaway to a local home near Opechee. Fossil casts donated by Museum of the Rockies and Burpee Museum of Natural History as well as several other items also raised money in the auction.

New this year to the Shindig was a trailer housing a life-sized bison made out of horseshoes. There was also a bison that was half bones and half-taxidermied.

One big reveal at the Shindig was new information regarding a Carter County plesiosaur. Llane Carroll discovered the plesiosaur on BLM land in the southern part of the county in 2016. In 2018 it was excavated. Originally, the discovery was believed to be one adult and one juvenile. But just before the Shindig while prepping the specimen, BLM sponsored intern Elliot Smith learned that it was, in fact, one plesiosaur with an underdeveloped flipper on one side. 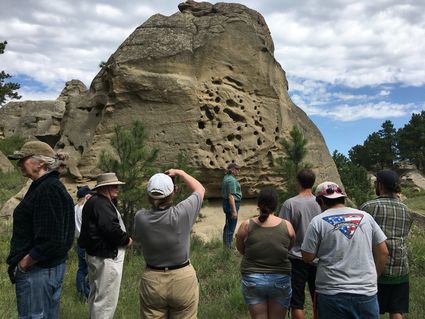 This year’s Shindig was also filmed. The footage will be used as part of a national TV series slated to air on PBS prime-time schedule in summer 2020. The show, “Prehistoric Road Trip,” will uncover and discover the history of North American dinosaurs and other prehistoric creatures, including ancient fishes, mammoths and early mammals. The show will be three one-hour episodes spanning 2.5 billion years.

The Shindig was again well attended by families with young children, field crews and retirees from all across the globe. It provided an economic boost for local businesses who will now shift their focus to the Days of ’85.

“It was a success all around,” said Moore.